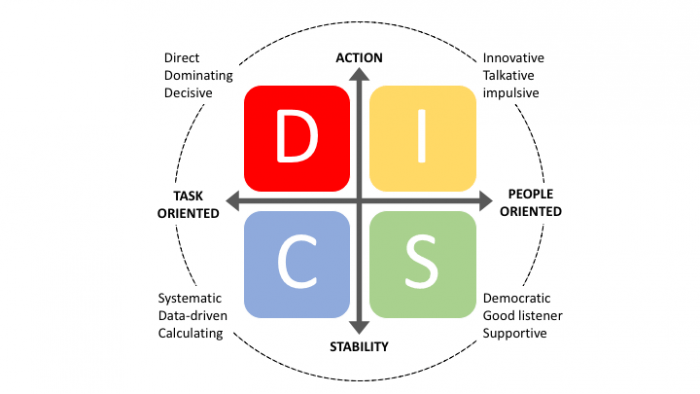 People are different. Often times our ability to work with different people will be the difference in whether we are successful or not in our personal and professional life. As a professional, we can choose to see these differences as an annoyance and try our best to avoid people or we can work with these differences to elevate our team and embrace a diversity of thought and ability that can lead to incredible accomplishments.

I advocate for the latter, and today I am going to give you some insights into how to effectively work with people that are different from you.

DISC is a behavior assessment tool that helps explain how people are different, and often predictably different. It helps build our self-awareness skills and provides a framework to understand, then build effective relationships with others. This tool is effective because it focuses on observable behaviors rather than personality. Behavior is flexible meaning that once we are aware of our behavior we can adapt it to meet the needs of individuals we work with or situations we find ourselves in. Personality is more or less fixed, and a complicated mix of characteristics and values that drive an individual’s distinctive character. Therefore, you can’t really change your personality, but you can change your behavior to drive better outcomes for yourself and others. 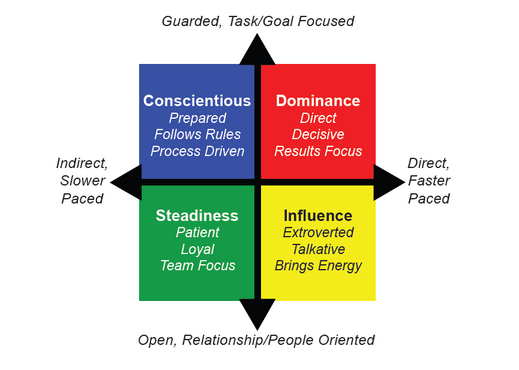 I’m going to describe a person you may have encountered. This person is always driving and fast paced in their decision making. They are often happy to lead from the front and don’t spend too much time gathering other people’s input before making a decision. They don’t often disclose any personal information about themselves. They are blunt in their answers and want you to get to the point as quickly as possible when talking. Does this sound like anyone you know? Or maybe it’s you?! This person is using a Dominant (D) style. In the matrix above, they are that red box and are fast paced, task oriented, direct and guarded. Their D style comes out most often when there is a task or goal that is of high importance to them. These are all observable behaviors that for some may be embraced and for others may be a challenge–a challenge that can lead to conflict.

Who is often in conflict with the D’s of the world? You got it. The Influence (I) style and the Steady (S) style. Those are the yellow and green boxes above, and as you can see they are people oriented not task oriented, they are open in their demeanor and often share personal stories about themselves. The S style is also slow paced so when the D is saying, “Go, go, go!” the S is saying, “Can we slow down and think about this a little more?” The I’s and S’s enjoy building relationships before focusing on the task, therefore a D’s focus on getting a task done can leave I’s and S’s feeling under appreciated and hurt.

Okay, so right about now you may be thinking, “This is great information, but what do I do with it?” Let’s start by defining conflict. Conflict arises when our needs are not met and our expectations are mismatched. Either I expected something from you and didn’t get it or you expected something from me and didn’t get it. In the above example, a D style person is expecting that everyone is going to be okay with quick decision making and task focus. They are going to expect that no one questions their actions and allows them to stay in control. An S style person, on the other hand, is going to expect that everyone is taking their time and thinking long and hard before making any decisions or changes. They are going to expect that everyone is working in harmony and there has been plenty of time for consensus building. If an S style person doesn’t know that they are working with a D style person and vice versa that is when the fireworks can blow.

Here is another way to think about conflict. We are all more or less predictably driven by our needs and our fears (see image below). DISC helps to give us insight into those needs and fears, which in turn can help us understand and predict other people’s behaviors. Knowing this we can anticipate the needs of others and in turn drive trust and cooperation. Behavior flexibility combined with situational and emotional intelligence allows us to know when flexibility is necessary and are keys to managing conflict and driving productive results.

Look at the image below: Which box do you most strongly identify with? Not sure? Ask a trusted friend or colleague their opinion based on what they know about you. 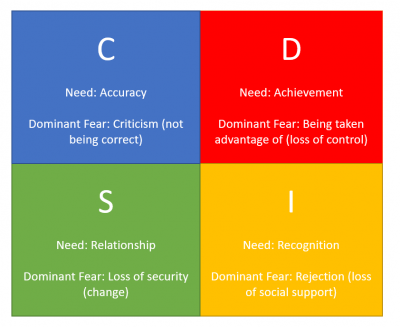 Here’s a quick story for you to highlight how DISC flexibility can help you in the workplace. This story was shared with me by a colleague and one that I love because the solution is not the obvious one, however, using insights from DISC it becomes clear why this works so well.

A young supervisor, let’s call her Dora, and her team are annoyed by an older gentleman on the team, let’s call him Chuck, because he shows up every day to work and immediately travels from cubicle to cubicle talking to everyone on the team. He talks about his weekend plans, his family, his hobbies, pretty much everything except for work. Not only is Dora annoyed by this behavior so is everyone on her team. They all try to avoid Chuck and try to end their conversation with him as quickly as possible, but Chuck doesn’t seem to get the hint and continues to talk people’s ear off. Dora talks to Chuck about the importance of getting to work and spending less time socializing, but the message doesn’t seem to get to Chuck. He persists despite Dora trying to logically and rationally explain why it’s important to get to his desk quickly in the morning.

Dora finally consults her boss. “It’s Chuck! He’s a nice guy, but he is annoying everyone on our team and killing our productivity. What should I do?” Her boss thinks about it for a second and says, “I want you to tell Chuck that every morning he needs to come to your office first thing. You are going to give him 15 minutes of your time and he can talk about whatever he wants with you before he starts his work.” Dora is incredulous, “What?! I don’t want to encourage him! I don’t want to waste 15 minutes of my day, every day.” The boss shrugs, “Just try it. If it doesn’t work out, we’ll think of a different solution.”

So Dora tries it, and what do you think happens? Chuck (a very high I, social butterfly) gets his need met–he is acknowledged, he is recognized and he begins to become more productive. After his 15 minutes of conversation with Dora, he happily goes to his desk and gets to work. He stops pestering everyone in the office. Chuck, as a high I style, had a driving need for recognition and a driving fear of rejection or loss of social support. His need was not being met and so (maybe unconciously to him) he was trying harder and harder each day to gain the social support he so desperately needed. He expected that people would want to talk to him and when his expectations weren’t met he just ratcheted up his I style behavior, which became very negative.

Dora also got an unexpected benefit out of the solution. She began to get to know Chuck and realize how much insight and knowledge he had to share. She began to view him as a valuable member of the team and see where he could add value to certain projects using his effective I-style behaviors of extroversion, enthusiasm and innovation.

Think about the people that you work with. Who on your team demonstrates the D style? I style? S style? C style? Provide examples for why you think that. Remember we are talking about the most consistent observable behaviors that we see. Someone might be having an off day in which they use a style that is uncharacteristic of them. Try to focus on the behaviors you observe most often. In addition, many people are a combination of behaviors. It is not unusual to see someone with a combination of D/I, S/C or other variation. You won’t get it right every time but the more you practice the better you’ll get and the better you’ll know how to communicate and collaborate.

Ultimately, I’m a big believer in open communication and explicitly stating expectations so if you don’t know you can always ask. “Do you prefer to work at a fast pace? Do you like to talk out loud while you are working through a solution? Do you need time to consider all sides before making decisions? If I’m presenting a new idea, would you like me to give you time to read it over before we discuss?”

One final food for thought: nearly 80% of people are people-oriented (S and I style) so most people you encounter will want to have a relationship with you before they are willing to be directed by you.

Remember this is really tough. Keep challenging yourself, keep being reflective, learn from the process and as always, let me know how it goes.

Connect with Erin on LinkedIn: https://www.linkedin.com/in/erin-glaser/